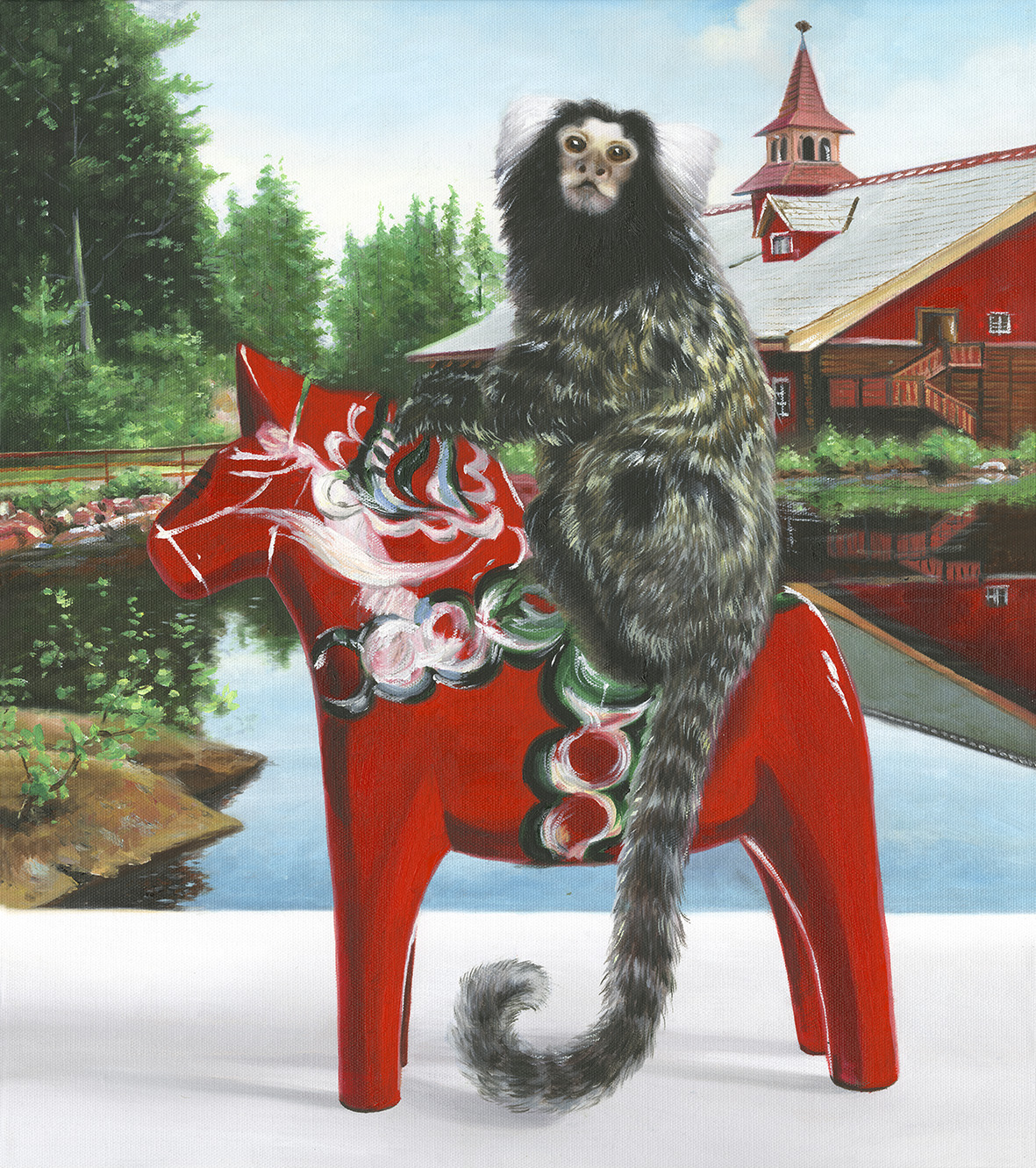 Önskelista
Konstnärer:Jason Wheatley
Dela:
People tend to project their own human attributes onto their pets. When animals become personified, the underlying humor provides a stage where the viewer is able to follow the story without becoming completely lost in the human drama. My work is constructed under this assumption and riddled in layers of parables, some idiosyncratic and some universal. By rendering the animals and objects in a realistic manner the underlying meaning of the work blurs into a realm of surreal fantasy. I am uninterested in painting things the way they are, I would rather gather the mundane bits of reality around me, dust them off and polish them until they shine fantastic. I believe everyone can learn how to contort the harsh reality of mere existence into a daily routine of meaningful and magical moments. As one continues down the path of fantastic realism, the mundane is slowly stripped away, until the only two left at the bargaining table are our own fantasies and a more reasonable reality that now has no other option other then to begin the negotiations.

Born on February 4th 1973 in Salt Lake City, Utah, I was given the name Jason Andrew Wheatley. I have painted and drawn animals since I can remember and have used them as spirit guides to venture into the Aetherial realms. It was here I met a magical monkey named Tiku who has been my mentor and companion ever since. He has helped guide me through my mystic sojourns into the dreamscapes of my paintings. As part of the shaman’s journey I laid to rest my given name as I was reborn and assumed the magic moniker tikunkit. I now reside in Mörlunda, Sweden where I have converted an old church into my dream studio. Since 2006 I have been collaborating with other artist around the world with a group of artist who call themselves The Oyster Pirates

After a years of collaborative magic we had more than enough work and momentum to begin exhibiting our pirated gems and booty loot. We started exporting our chaos sigils, the precious pearls of our third mind, across the globe. With shows across the U.S. across Europe and into Africa under our sails, we have all been focusing on our individual work as well as more intimate collaborative duo’s. As each of the original krew members plunder and pillage around the globe our passion for cultivating collaborative pearls push open new frontiers of explorations into the third mind. Our original ship now anchors in the Great Salt Lake where the artist Christian Michael has restored her back to sea worthy. With new and old crew members we have traversed the continents and anchor our expanding fleet in ports all over the map to spread our infectious spirit of creation and trade our precious looted pearls

Douchebags in the Dunes

5,400.00 kr
Lägg till i varukorg
Önskelista
Back to Top
Close